ASA-LIFT AND GRIMME GROW TOGETHER

In 2013, the family company GRIMME acquired the majority stake of the Danish company ASA-LIFT, a specialist manufacturer for vegetable technology

In 2013, the family company GRIMME (Damme, Germany) acquired the majority stake of the Danish company ASA-LIFT, a specialist manufacturer for vegetable technology. The company was founded in 1936 and is based at Sorö, about 80 km southwest of Copenhagen.

Over the past five years, the cooperation at both technical and sales level has been intensified a lot. Already today ASA-LIFT machines are equipped with high-quality components from GRIMME subsidiaries INTERNORM (plastics technology) and RICON (a factory for webs and conveying equipment). In addition to the experienced long-standing ASA-LIFT dealers, all GRIMME sales and service companies as well as selected GRIMME Premium Partners are now also involved in the sale of ASA-LIFT products. To increase manufacturing capacity, the new 2,200 m² building was opened in April 2018 and new sheet metal and tube lasers were installed. Since the takeover, the workforce of ASA-LIFT has increased by more than 30% and currently has 130 employees.

The next important step of cooperation is to incorporate the corporate design of the brand ASA-LIFT to the GRIMME Group in order to express its affiliation. As ASA-LIFT has a very good reputation among vegetable growers worldwide, the brand will retain its logo and is adapted to the corporate design of the GRIMME Group. The painting of the ASA-LIFT machines will be changed from blue to the eye-catching GRIMME red during the production year 2019.

With SPUDNIK, ASA-LIFT and GRIMME, the GRIMME Group has three strong brands in the sector of agricultural machinery, which offers innovative potato, beet and vegetable technology to users worldwide. GRIMME positions itself as a manufacturer of potato-, beet- and vegetable- technology, which are manufactured in series. SPUDNIK provides potato and beet technology for the special requirements of North American customers. ASA LIFT is the specialist for vegetable harvest technology with strong focus on customer specific solutions.

At GRIMME Technica in Damme (Germany), from December 4th to December 7th 2018, the company will present ASA-LIFT machinery with new colour and the adapted logo for the first time.

"The ASA-LIFT team is pleased to be an important part of the GRIMME Group and together we will consistently continue on the course we started in 2013", says Erik Havaleska, Managing Director of ASA-LIFT.

Franz Grimme emphasizes: "With ASA-LIFT, we have succeeded in integrating a premium brand in vegetable harvesting technology into the GRIMME Group. We will continue to intensively expand this very special segment so that we can meet the increasing and high individual demands of our customers in the best possible way with innovative solutions". 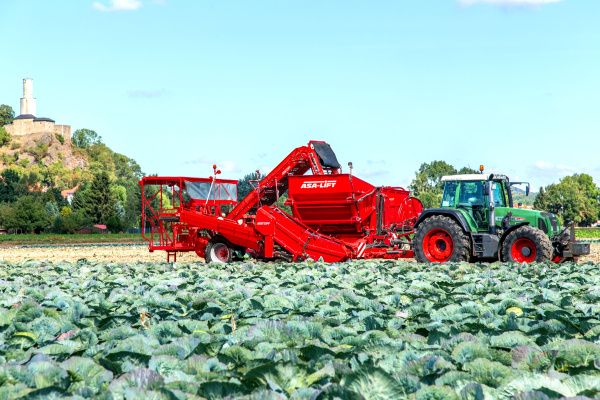 Whether its new machines or digital solutions, you'll find all the latest information here.